RAVE REVIEWS FOR HAPPY EVA AFTER

When you find yourself laughing out loud on the first page of a book it's a pretty good start. This was one of the most delightful books I've read in a long time, in the same vein as The Rosie Project, not quite as sharp, but perhaps a little funnier. Sebastian teaches English as a second language (and there are plenty of jokes for the grammar geeks), married to Sarah, a career woman who is desperate for a baby. When a Czech student, Eva, joins his class he gets drawn into a mystery that sets them all on a different course.

The New Zealand Herald included HAPPY EVA AFTER in its best books of the year and said:

It's always interesting to read chick lit from a male perspective, in this case, that of Sebastian Pink, an English-as-a-second-language teacher struggling with the fact his career-driven wife is desperate to get pregnant. Sebastian takes refuge at local watering holes, or loiters at a park bench overlooking London with a crossword and his beloved dog Claude, as he tries to work out how he feels about bringing another life into the world. This internal struggle is interspersed with hilarious linguistic exchanges with his students, which author Chris Harrison absolutely nails. Add an alluring student with a secret and you've got yourself an engaging and clever read that will make you smile.

Sebastian Pink is an English teacher in a London college. He becomes intrigued by Eva, a Czech student, and tries to pry into her life. The novel is a delight for anyone who enjoys playing with words, an "addiction and affliction" for Sebastian. Language and grammar pedants will find the book particularly amusing. Chris Harrison delivers a very enjoyable read, with an array of memorable characters.

Sebastian Pink, a language teacher at a London school for foreign language students, is married to a career woman whose biological clock is ticking maddeningly. Just why these two are married is beyond me; they are diametric opposites. There's absurdist drama after absurdist drama and a cast of colourful characters who combine to create an amusing read. I can see Hugh Grant in the lead role.

The title says it all and delivers on its promise. A married couple and all their regular woes makes this hilarious.

English teacher Sebastian Pink is hesitant about starting a family with his strangely distant wife when he meets Eva, a Czech student who becomes the centre of this tale of suburban entanglements.

Sebastian would like to think he's happily married to Sarah, but she spends so much time at work that he sees more of his dog than his wife, even though she has suddenly decided that the biological clock is counting down and they better procreate quick smart! Teaching at a London language college, his main interests are cryptic crosswords and the grammatical faults of others. He is a kindly man, and when one of his students appears to be involved in an unwelcome and sordid situation, he tries to help - but has he fallen into a linguistic trap of his own making? A warm and lovely novel about the grammar of modern life.

This is a wonderfully funny novel about an eccentric teacher, his wife and a mysterious woman.

Happy Eva After is a seriously funny comedy about a man, his wife, his dog, an alluring young woman with a mysterious past, and the nuances of the English language. As a teacher at the Future Perfect Language School, "the Fawlty Towers of London language colleges" (seriously), Sebastian Pink is accustomed to confusion caused by the complexities of the English language. While it could have been just an entertaining comedy-of-errors, the book proves to be much more. This is an intelligent and well-written novel that sustains a level of wit and dramatic irony without compromising the language, the pace or character development. 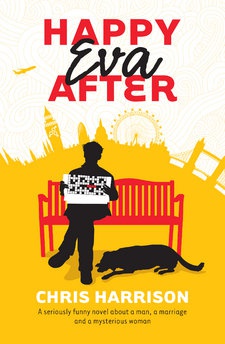